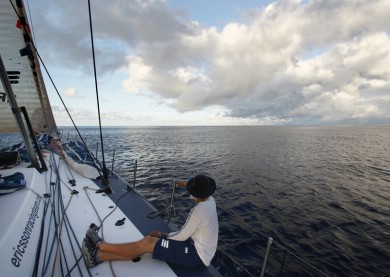 We are experiencing a little difference in wind from forecast to what we actually have – and for once, it is in our favour.

Flying along in flat water at 20kts is a great feeling and these boats quickly remind you of just how aggressive they can be. Even in 5knots of wind, we can see the speed up to 10kts, and now in 17 knots we are low 20s and high teens constantly.

It’s easy to get complacent about how many miles these boats quickly eat up and spit out. We have seen more current than expected as it flows between the Maldives 200nm to our left. What awaits us up the coast of India is anyone’s guess, and there is a chance that we will be playing close to the shore as, if the predicted light winds appear, then we will need the local land and sea breezes to get us to Cochin, hopefully in 1st place.

We have put a lot of miles on the rest of the fleet in the past 2 days, but could easily see this all vanish under one cloud. In the last 20 hrs our ETA has changed by more than 2 days, so as far as knowing when we will finish – that’s anyone’s guess

Passing by the nav station this afternoon, after 4 hours of a gust being 3 knots of wind and glancing at GPS, brought memories flooding back of only days ago. Top speed for trip, 39.4 knots! Not 3.94 knots.

If I remember correctly, we were in the nav station every few hours, “How much longer do we have this breeze for? When do you think it is going to drop off? Now it is replaced by; “when are we going to get some breeze and do you think we will have it for more than 5 minutes?”

This afternoon was marked by the second crossing of the equator in this race and a re-awakening of King Neptune. He was not amused to be disturbed so early in the race for a second time and took some severe punishment to the only crewmember of Ericsson 3 to have not yet crossed the equator, young Martin Strömberg.

Martin was, without compassion, lashed to the aft media aerial and after not being able to give the latitude of Cape Horn, laden with the heathen brew. As extra punishment for being a sail maker, Neptune’s latest helper in a long line of helpers going back as far as lady Cod Fish, James the Hairdresser (Martin Krite) from Southern Sweden, famous for its fashion in hair design, came on deck to unleash the latest in heavy metal basher mullock hair styling.

It was only minutes before our victim was refashioned into a 1980’s Def Leopard fan look alike. If any of our shore crew is reading this, Martin will need a black def leopard Singlet, one pair of tight black jeans and Doctor Martin boots as soon as he hits the dock.

King Neptune was satisfied with the massive punishment handed out .He let us pass on our way and disappeared into the bowels of Ericsson 3.

All in all, a very entertaining afternoon. As for the remainder of the leg, well it feels as we have a long way to go!