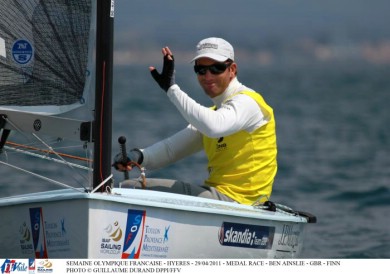 After a delayed start while the wind settled in more or less one direction and the fleet made a clean start. Almost immediately Zach Railey (USA) and Pieter-Jan Postma (NED) tacked out to the right with Ben Ainslie (GBR) favouring the left. When Ainslie tacked back about a third of the way up the course, he was already clear ahead. At the first mark Ainslie held a small lead from Thomas Le Breton (FRA), Giles Scott (GBR) and Daniel Birgmark (SWE). Railey was in fifth and Postma further back.
Ainslie slightly increased his lead on the first downwind, being followed round the left hand gate by Le Breton while Birgmark chose the right hand gate (looking downwind). When Birgmark crossed back he had moved up to second, though Ainslie had already got away.
At the second top mark Ainslie had extended again and led round from Birgmark and Le Breton. Railey was still fifth though Postma had closed the gap. Railey needed one boat between them, and though he stayed ahead of Ed Wright (GBR), Postma passed Ivan Kljakovic Gaspic (CRO) for a very tight finish.

Nothing much else changed on the final downwind with Ainslie winning his seventh race of the week ahead of Birgmark, Le Breton, Scott and Railey. Wright finally finished sixth, just ahead of Postma, which gave the silver to Railey and relegated Postma to bronze, after sitting in second place for much of the week. Going into the medal race, Kljakovic Gaspic potentially posed the biggest threat to Railey and Postma, but uncharacteristically he never really got going in this race.
Ainslie was upbeat about his performance this week. “The last two regattas have been really good for me – I seem to be happy with the kit development we’ve done over the winter and speed seems to be reasonably good in some conditions and very good in others, so hopefully I’ve got a package I’m happy with so I’ve just got to go out there and race well. The important thing is to try and keep the consistency, and try and keep things rolling along for the next event.”
He continued, “I’m really looking forward to the next regatta which will be Skandia Sail for Gold, which, being at the Olympic venue, is obviously a bit more relevant in terms of the Games next year. Hopefully I can keep the form going and keep the results coming along for that regatta as well, so that’s really the focus now.”
Despite winning two races this week, Dan Slater (NZL), who finished ninth in the medal race, said, “I havent really sailed that well this week but as you can see from the results it wasn’t really straight forward on the course. With no disrespect there were a few new faces up the front at the odd top mark rounding during the week. I think you have to careful not to read to much into what happens at these regattas as often this week things happened that were beyond sailors control and in the the lap of the gods. However all that said Ben was in a class of his own this week sailing very well and fast.”
Railey commented on the medal race. “The race had huge pressure differences so it was changing all the time and the results were never certain till the end. The plan was to stay close to PJ and Ivan and try to secure a medal. I was able to get the one boat I needed between PJ and myself so that was a plus to move up a place.”

How does Railey feel about his progress so far? Does he see a way past Ainslie, who was the only person to stand between him and a gold medal at the 2008 Olympics? “We have a plan set out for 2012 that we are very confident in and are sticking to 100%. We know the challenge we have against all these guys, including Ben, and we are looking forward to how the next 15 months unfold.”
So after an 11 race series, Ainslie wins by a staggering 40 points. The rest of Skandia Team GBR, not to mention the rest of the Finn world, must be wondering what they have to do to beat the 34 year old reigning Olympic Champion. He has proven time and time again that he can make great comebacks and many thought that this would be his toughest challenge yet. There is still a long way to go but so far Ben Ainslie is making it look easy.
The next Sailing World Cup event is the Delta-Lloyd Regatta in Medemblik, starting May 24.