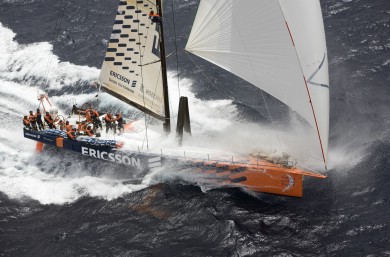 Friday 17 October 2008 07:00 GMT
When Mike Sanderson won the last edition of the Volvo Ocean Race, his crew nicknamed their boat ‘Black Betty’ and heaped praise upon it, touting its speed and reliability.

Fast-forward three years and Irishman Ger O’Rourke acquired ‘Black Betty’ just months before the start. Then, his entry was in doubt until Delta Lloyd stepped in with some much needed financing.

Sailing an ‘old’ boat, with a crew that was assembled, literally, at the last minute, not many observers gave Ger and his men much of a chance – especially in the early going. But a look at the leaderboard at 0400 this morning shows Delta Lloyd has slipped into the top half of the fleet, just 73 miles behind the leader.

O’Rourke and his crew have gained by sliding down the African coast, and waiting until the last minute to gybe west. But they’re currently on the same line as race leader PUMA, and in a tight battle with Green Dragon who are converging from the north just seven miles behind.

The rest of the fleet is noticing. This from Bouwe Bekking on Telefonica Blue: “One thing I have to mention, it is good to see how well Delta Lloyd is going, not only they have been sailing very smart, but they are not slow either. That will open doors for the next race, and hopefully more teams will use older generation boats, and still be competitive.”

The other team making a move overnight is Torben Grael’s Ericsson 4, who are positioned furthest south, and sailing a lower angle as the fleet moves west. This has allowed Grael to move back into second place on the leaderboard, just four miles behind PUMA on the 0400 position report.

But life hasn’t been without its drama on Ericsson 4 where ‘Doctor Phil’ Jameson put his medic training to good use.

“Tony’s knee was giving him a bit of bother so I called Dr Spike Biggs, one of the race’s medical experts, and he advised me to try and drain his knee. So with the help of Stu [Bannaytne] we gave Tony an anesthetic and proceeded to suck some of the fluid off using a syringe, then we carefully cut the infected area with a scalpel. We then bandaged him up and sent him to his bunk for 24 hours. We hope that he that he will be running around in no time!”

Meanwhile, most of the fleet has moved as far west as poor Telefonica Black, which means the Spanish crew can no longer claim they have leverage out on that side of the race track. Thus their loss is pretty much ‘locked in’ as they remain more than 200 miles back of the leader.