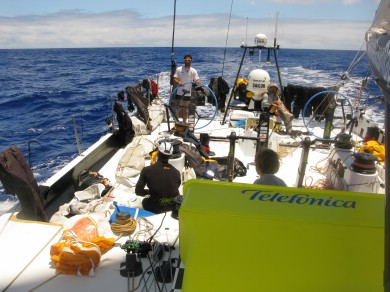 It’s been a pretty wet 24 hours aboard the good ship E4!

We have been sailing along making a very high average boat speed. Not quite record pace, but very close.

We have a wind angle of roughly 100 degrees. Anything in that sort of region means some serious fire hosing on deck!

For Ryan Godfrey and I, this is where we get a sort of revenge on the rest of the crew. We spend our lives completely underwater up on the foredeck while the other boys take great delight in laughing at us. At this angle, they get a taste of it, but still no way near as bad as the front end. It humours us to hear them complaining about the water.

We got our first sighting of Ericsson 3, 4 hours ago. She is roughly 8 miles dead astern of us and sailing a very good race.

I imagine we’ll be tied together for a while now. It is quite good to have another boat in sight as it pushes you to race a bit harder.

We’ve had a few crimes onboard recently….. The latest one was in the toilet. I won’t go into detail, but I can assure you, it wasn’t pretty.

Another crime was the loss of the serving spoon which Dave Endean decided to throw overboard with the leftover food. We are now stirring our meals with a winch handle! In Dave’s defence, He was handed the pot in pitch blackness and asked to ditch the food overboard. So there is another culprit involved.

Everything else seems to be rumbling along okay. We’ve had our fair share of breakdowns, downtime and bad luck in this leg. We’re just doing our best to minimise all that nasty stuff and keep the bow pointing toward India.

The crew are doing well with only minor injuries, which is a good thing. Tony (Mutter) is enjoying being back on the yacht. He’s being extra careful not to hurt himself. I guess he just doesn’t want me near him with the medical kit again!