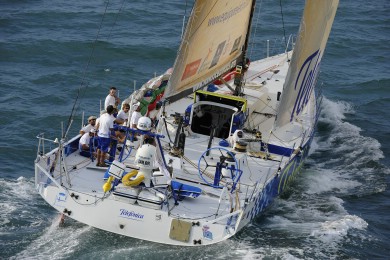 We went stealth yesterday to avoid helping the guys coming from behind. We did not want to show them where we would park so they could sail around us.

It was extremely tricky conditions, once again with no breeze from everywhere and hard to get into the coast to get the coastal breezes. We sailed back and forth for a whole sched, only making good 2.4 miles to the finish. The beam of these boats help on the speed in anything except these light airs.

We are getting closer to the coast and meet massive clouds with building thunderstorms. Hard to say what to prefer: the constant very light breeze or the unknown in the clouds. In these conditions, all is still open, but for now, we are happy to be ahead of the other teams fighting for third.

A few of the guys were knocked out by the heat today, just lying down in whatever shadow available. The computers in the nav station are fortunately waterproof, as it is dripping sweat on them.

Right now, we woke up Thomas (Thomas Johanson/FIN) 20 minutes before his watch: “Thomas! Thomas!! We are tacking. We are tacking! Right now!” It was a joke, but Thomas did not know that and still took a few minutes to get out of his sweaty bunk. He was called again, and to increase his stress level the generator was turned on. We normally use it for tacking the keel from side to side, but not in these four knots of breeze sailing downwind, of course. But it worked, he really got some speed on. He packed up his stuff quickly and ran towards the cockpit with it only to be met by five guys laughing at him.

Tonight there is an armada of small fishing boats around us. They are open wooden boats with two small engines on. Don’t know what fuel they use, it smells very much and very special. A bit embarrassing to think of the fact that we could probably buy the whole fleet for the price of one of our sails, but these guys seem very happy. There are generally four persons per boat, and I do not know which of us think it is most fun to see the other. Now that the sun is down, there are always hundreds of small lights around, very close. We have to be careful about where we go if there is a squall with reduced visibility. But it is a spectacular experience, from not seeing a boat for a week, this is suddenly very social.

Most seems to be lighting for fish, and quite a few have red and blue disco lights flashing! Combined with the lightning from the thundery showers coming off the coast, this is a fantastic view.