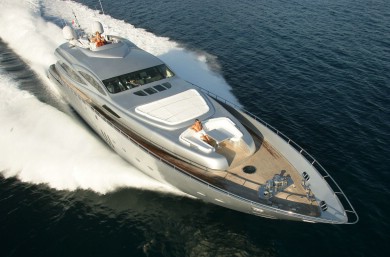 The latest unit of the Pershing 115’ will leave shortly the moorings of the Marina dei Cesari in Fano for Brazil, last stop Rio de Janeiro. It will take the yacht about a week to sail round Italy, after which she will be loaded onto a large transport ship which will plough through the Atlantic Ocean to Brazil where her owner is eagerly waiting for her.
“South America is an extremely important market for us, and one on which we are achieving very good results. This is also due to the support of our dealers like, Spirit Yachts, which has been working with us for over 25 years,” comments Tilli Antonelli, President and Founder of the Pershing S.p.A. shipyard.
Pershing 115’ is the finest expression of the company’s distinctive values, a style revolution created to surprise. Developed by means of a design challenge which has kept Pershing staff, De Simoni Designer and Ferretti S.p.A.’s AYT (Advanced Yacht Technology) busy, this model is characterised by the highly original external lines, both sinuous and resolute at once, as well as the extraordinary performance of which she is capable while still maintaining a high level of comfort.
This 35 metre maxiyacht – flagship of the Pershing shipyard – is both bright and aggressive. The technical and style solutions chosen are highly innovative, painstaking care has been taken over the tiniest of details and the yacht guarantees an outstanding performance. The standard version of Pershing 115’ is powered by twin MTU diesel engines totalling 7400hp, combined with the applied thrust of two Kamewa Rolls Royce hydro-jets guaranteeing a top speed of around 40 knots. The recently launched Pershing 115’ features a significant innovation which makes her stand out from many megayachts. She has, in fact, been strengthened by a new generation Vericor TF50 gas turbine, able to create a power of over 5100hp, with a central hydro-jet thrust. The result is an improvement in both performance, with an equal overall weight, and resistance to significant stress. This technology, typical to aircraft, is rarely used on yachts due to its complexity and the cost of the individual components. In fact, its use requires special accessories, mechanical parts, and technologies incorporated in the entire system such as the titanium exhaust, and the reduction unit. Another huge advantage of this structure is that the yacht is quieter with no vibrations..…even at a top speed of 52 knots!
This yacht encompasses all those features which have made Pershing a world leader in the production of open yachts: innovation, comfort, performance, design and class.

A host of different features characterise the new yacht, making her unique. A very special wood – frise sycamore maple has been used for all the furniture, which includes an innovative LED lighting system integrated and concealed within and throughout the interior. The interior of the yacht is illuminated using warm led lighting in order to make the various environments more inviting and reducing the tiresome overheating produced by traditional halogen spotlights.
The bow is furnished with a semicircular divan and a table which can be lowered to the height of the settee in order to create a single sundeck area protected by a retractable bimini top. The large upper sundeck has been designed in such a way that it features an area, where those aboard can relax in the sun in complete privacy.
The fly deck features an innovative steering console, sundeck, an ice box built into the bench and three chaise loungues making this area both independent and functional, somewhere to fully enjoy relaxing on board.
The large cockpit in the vast covered area can be used both during the day and in the evening, and features seats, a teak table which can seat 10, a bar unit and a large sun pad area.
The details of the Pershing 115’ salon have been redesigned whilst still maintaining the original layout: three large, circular sofas at the entrance in white “Perrenials” fabric, a unit housing the 52’’ television featuring a special lift, a seat back unit which creates a division to the dinning table, wall-mounted unit with small goods lift, fridge and storage for the tableware. The tables, both those for dinning and at the entrance, are made in burgundy-coloured crystal and can both be opened out, produced by “Naos”. The dinning table features ten chairs in cognac coloured leather. There is parquet flooring in the dinning area and fitted carpet in the salon area, again featuring a design and colours which have been personalised for Pershing by O.T. Four white opal glass “Marioni” lamps complete the furnishings.
The helm station, covered in dark grey ultra leather, features three raised seats in carbon black leather, the height and inclination of which can be adjusted. The seats are set opposite the instrumentation panel using the most modern navigation and communications technology, such as the Raymarine G17 series system.
A special area has been created in the day zone, midway between the upper floor and below deck areas. A highly original cut in the line of the superstructure has allowed for the creation of an entertainment area, the Playroom, featuring an L-shaped divan. The designers have paid particular attention to the arrangement of the audio/visual equipment here, using the features of the components and materials to the very best in order to create a suitable environment for both listening to music and watching the 42’’ television set. The walls are covered in cream-coloured leather with built-in led light, just like the stern wall, which features leather tiles with contrasting stitching. The parquet flooring, part of which has a fitted carpet, features the same design as that of the upper salon and the lamps with ecru–coloured fabric lampshades produced by “Marioni” make the environment both warm and comfortable.
The night area features four cabins: the full beam master cabin in the centre of the yacht, complete with private head, the two guest cabins and the VIP cabin to bow, all of which have independent heads.
The layout of the large, double cabin has been redesigned with the introduction of an equipped unit, completely covered in leather. This position at the entrance to the cabin creates an area which allows more privacy to the owner as the interior of the cabin is no longer visible from the corridor.

The walls are covered in camel-coloured leather, and have been padded to double as backrests for the two side benches in “De Le Cuona” design cream-coloured fabric. The wall in which the bed is inserted is marked horizontally by the lighting system. A large mirror above the bed follows the wall around. Underneath, on the other hand, the headboard is camel-coloured once again. A writing-desk complete with “Flos” lamp could be utilised as an office. The large dressing area is in sycamore maple and the floor covering is custom made.

The head is extremely spacious with predominant colours of ecru, white and grey. The floor, grating of the shower and bench inside have been built in white “Tassos” marble. The “Bisazza” coverings are a white and white gold coloured mosaic and feature a waterfall design. The shower also operates as a Turkish bath with colour therapy. The surface of the vanity unit, which also features the led lighting has been produced in grey tempered crystal with built-in “Antonio Lupi” washbasins. The polished chrome taps and fittings, such as the bathroom accessories featuring parts in white Corian®, are all produced by “Gessi”.
The guest cabins are also built in frise sycamore maple and feature camel-coloured leather. One cabin also has a pullman bed. In the VIP cabin, different and unusual in shape, the entire circular wall of the headboard is covered in camel-coloured leather and lit by concealed led lights. A curved “De Le Cuona” divan in cream coloured fabric completes the furnishings.
The corridor and stairs leading to the main deck have been built in durmast broad-leaf treated with white oil and the stairs feature a steel torus with “scotch bright” finish and led lighting. The rectangular section handrail is made in leather with stainless steel ends.
Lastly, the exclusive decor, entirely Fendi definitely needs a mention. The prestigious Italian brand gives substance to an ideal way of enjoying the living areas – warm, refined environments and a sought-after evocation of simple, elegant luxury create an ideal setting for an icon of Italian-made style.
Astern, and accessible from both inside and outside the yacht, there are comfortable accommodations for the crew in three double cabins with services and laundry area and galley complete with Miele electrical appliances.
A large hangar able to house a 4.20 metre tender is located astern. Pershing 115’ provides for a second hangar at bow which can store water toys and relative haulage crane.
Pershing 115’ has received a number of awards, such as the “ICE Award 2004 – The Italian Style MegaYacht”, for the elegance of her interiors, the “Showboats Award”, the “Robb Report Best of the Best Award” and the “Performance Award” at the Boat International “World Superyacht Awards”.

PERSHING AND FERRETTI S.p.A
Pershing is a brand of Ferretti S.p.A., a world leader in the design, construction and sale of luxury motoryachts, with a unique portfolio of nine of the most exclusive, prestigious brands in the nautical world: Ferretti Yachts, Pershing, Itama, Bertram, Riva, Apreamare, Mochi Craft, CRN and Custom Line.The Ferretti group, founded by Norberto Ferretti in 1968, is on the cutting-edge of the nautical world, thanks to constant product and process innovation, and continuous research within the sphere of technology. Luxury yachts are designed by a team of about 90 designers and specialised technicians (Advanced Yacht Technology), and built in the Group’s 25 production units. The Group’s over 3,000 employees, led by Chairman Norberto Ferretti and CEO Vincenzo Cannatelli, share a continuous quest for quality, technological excellence, top performance, an exclusive, innovative design, maximising comfort and taking painstaking care over detail. This common, daily commitment has taken Ferretti group to the very heights of the nautical world. The group is present in Asia, through a branch of representation and promotion in Shanghai, and on the American continent. An exclusive network of around 85 carefully selected dealers market group yachts in over 80 countries, and guarantee clients the very best assistance in marinas all over the world.